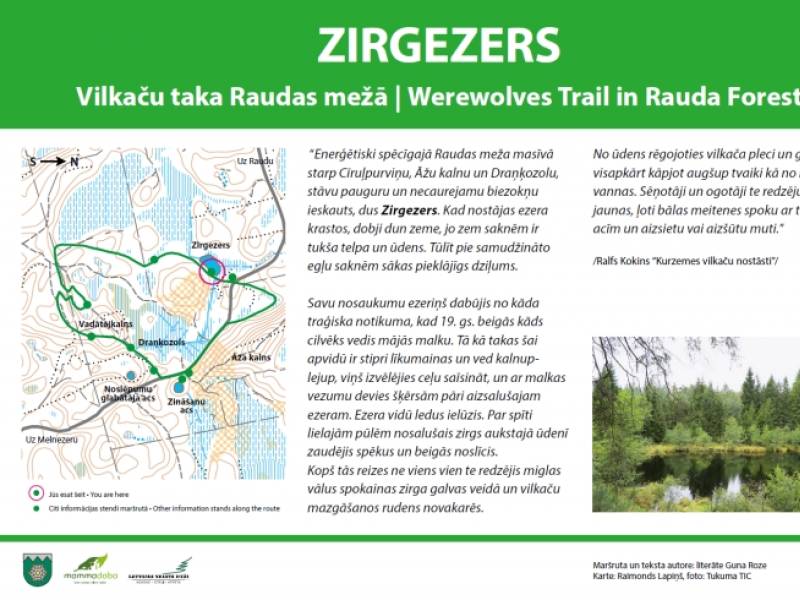 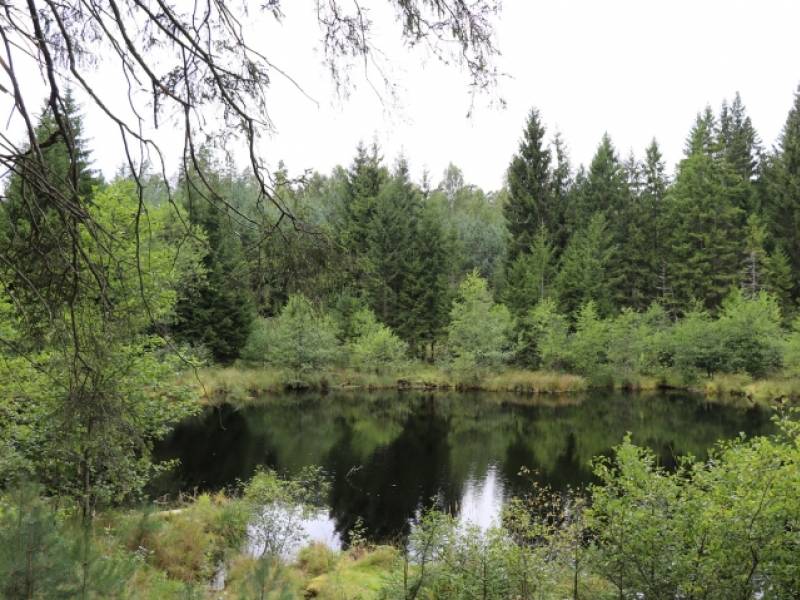 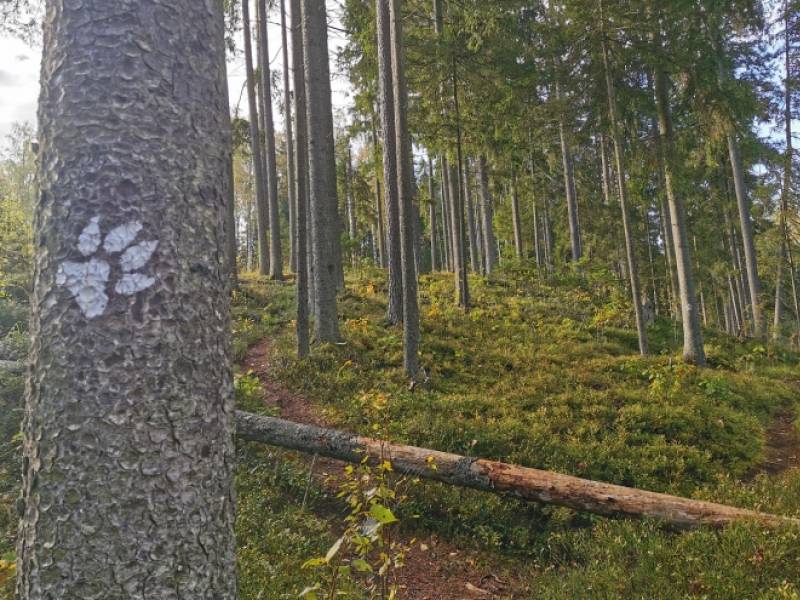 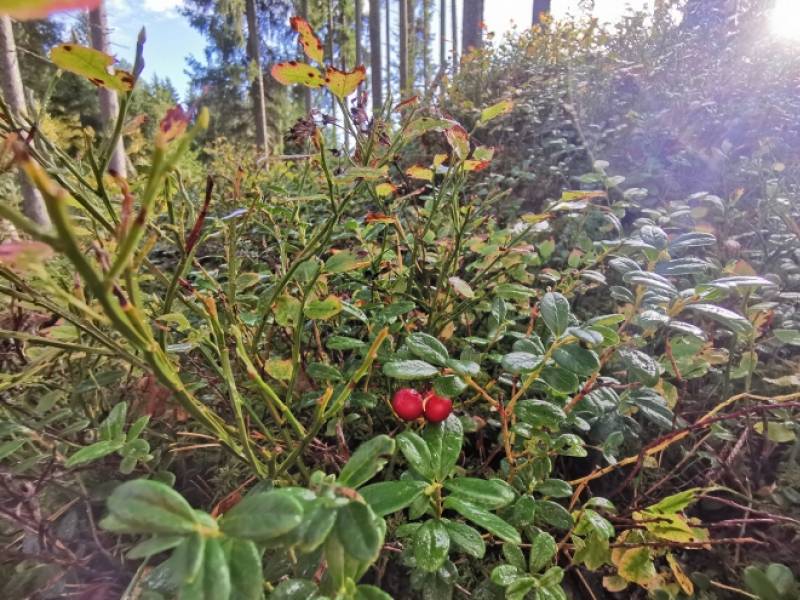 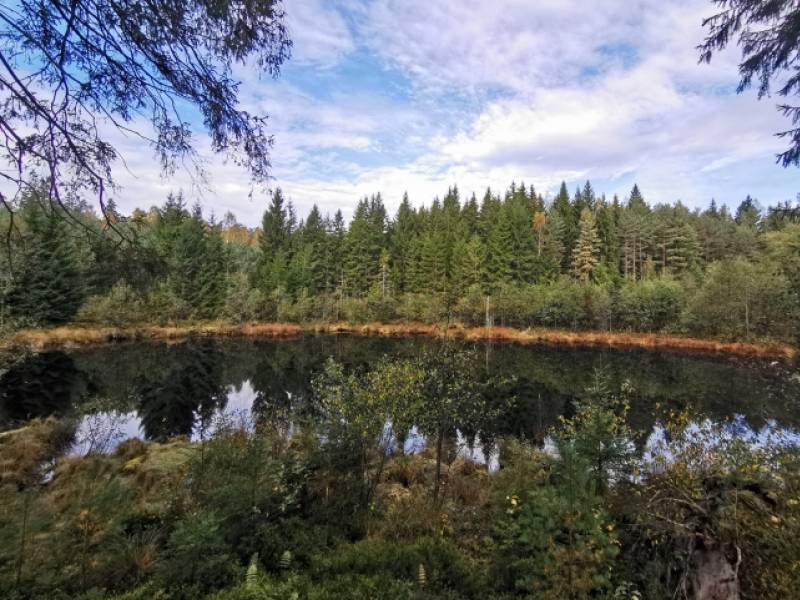 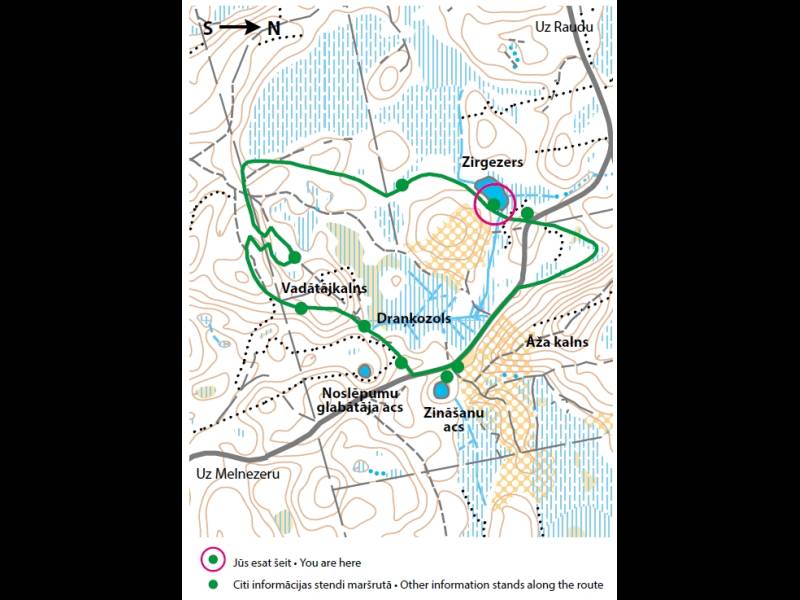 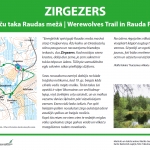 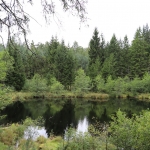 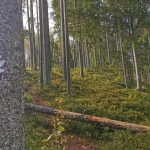 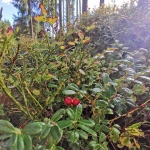 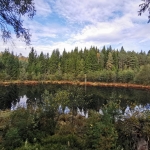 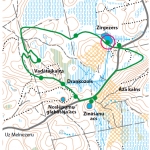 A small, rounded forest lake with rather dark, rusty water which obtained its name approximately 200 years ago. Legend has it that during the winter a man was bringing home fire logs and wanted to take a shortcut across the frozen lake. The ice broke in the middle of the lake, and the horse, no matter how hard it tried to get out, lost forces in the cold water and finally drowned.

The lake-shore is thickly overgrown with old spruces with low-hanging branches covered with lichen that even in bright daylight cast dark shadows over the calm surface of the lake. The depth is considerable right at the shore where the large spruce roots are all tangled up. When you stand on the shore of the lake, the earth under your feet makes a deep sound due to the hollow cavities and water amongst the roots. Just like in the nearby Melnezers (the Black Lake), here and there, amongst the roots on the shore, you can find several metres deep water-filled holes.

The Tale of Lake Zirgezers

In the woodland between the Cīruļpurviņš marsh, the Āži Mounds and the Draņķozols Oak, surrounded by steep small hills and impenetrable bushes, lies Lake Zirgezers. It is a small, rather round forest lake with dark and rusty waters. It's banks are overgrown thick with old fir trees. The lumpy, heavy, moss-covered branches cast black shadows over the calm mirror of the lake even on the brightest of days. Just where the reflections of treetops end, the bed drops sharply and the lake gets considerably deep. When you stand on the lakeside, you can hear a dull sound coming from underneath, for there are hollow crevices filled with water between the roots of the trees. Similar holes can be found near Lake Melnezers where they sometimes get up to several meters deep. The small lake got its name due to a tragic event dating back to around the late 19th or early 20th century: an old man was once driving home with a cartload of firewood he had gathered on a felling site deep in the woods. Since the paths are extremely curvy around these parts, leading up and down into the steep hillocks, the old man tried to cut the distance slightly by crossing the frozen lake with his cart. Ice cracked as he reached the middle of the lake, and, despite holding on to its dear life with all might, the horse lost the battle with the icy waters, gave in and drowned. Ever since, many have reported seeing clouds of mist in the shape of a horses head form over the lake.

Several other tragedies and even crimes have taken place in the lake and the area surrounding it, so the range of ghost stories about the place is both vast and impressive.

Mushroom pickers often claim to have seen a ghost of a pale maiden with holes for eyes and a mouth either sewn or bound shut, or even werewolves bathing in the lake on foggy autumn evenings. You could apparently only see their heads and shoulders, and steam surfacing as if from a hot tub. Skeptics say, these must simply be deer wading into the water.

Another one of these stories goes like this: On a fine, calm and rainy August day, a local man sat down on the side of the lake to fish. He was alone by the lake that day, and was very much enjoying the solitude while wrapped in a duffle coat, and sheltered from the rain under its wide hood, contently smoking away, thinking to himself.

Suddenly he heard steps coming his way from the foot of the mound behind him. He heard them approaching slowly and steady, and stop right behind his back. At first, he thought it was just another fisherman. The men would sometimes do this - they would come down, and watch others catch the big fish. When the silence grew larger, he decided to turn around and look. What he saw, scared him so much he almost fell to the ground. There was a corpse of a young woman with long, wheat colored hair, holes for eyes and and her mouth sewn shut with a rough thread.

The man stood there for a while, blinking in disbelief. He tried to come back to his senses, jumped upright to look more closely, but as he turned to take a second look, there was nothing there. He felt so uneasy, however, that he decided to rush home. Till this day, the old man hasn't been able to explain what exactly occurred that evening.

Yet another fisherman claims to have seen something elongated, resembling a pile of old and dirty rags, slide down hill towards the lake on a rainy day. Curious as to what he was seeing, he got up and went closer to take a better look. The pile of rags let out strange sounds, a sort of gargling or whiny belching. The fisherman thought there must be some animal hiding under the nasty pieces of cloth, so he got hold of a stick and tried to poke the shapeless object or lift it up, but what happened next, made him jump and fall over backwards. It was not a pile of rags after all, it was a rotten corpse of a young woman all covered in veins and shredded to bits. The creature was blindfolded with a dirty cloth, and her jaw was missing. The corpse gargled as if being choked, and crawled past the man continuing her way towards the lake. Without stopping, it disappeared headlong into a quagmire a couple of meters from the lake.

The man was certain it had been a "tangible" phenomenon, not merely an apparition or a blurry spectre. Soon after the encounter, he went mad and took his own life.

I think the most impressive story is the one from my carefree childhood years when we spent school holidays down in the Rauda village. At the bottom of Lake Zirgezers, there are all kinds of underground streams, and water there is always stinging cold. One hot summer day, a bunch of us went swimming there a couple of times although strictly forbidden to do so.

We discovered that the lake was not as deep as it appeared, maybe three or four metres at most at the deepest place. We had heard something about German arms, possibly even tanks, having been drowned there to hide from the Russian army. Wanting to find out if it was true, we took self designed underwater flashlights, goggles and air tubes we had nicked from the hospital, and went down there. It was a scorching hot Summer's Day, and even the usually icy water seemed to us at times warm like milk. There were, I think, six of us, and we dived in teams since there was no not enough equipment for everybody to go at the same time. We came up with a system to search the lakebed thoroughly from one end to the other.

When we got tired and most of the lake had been combed without any significant findings, the second team with all the older boys decided to go for the final dive before heading home. Two of them surfaced after a couple of minutes all excited and told us they had stumbled upon something huge and impressive. To move it, they claimed they needed a couple more flashlights and a helping hand.

One of the older fellows agreed to dive in and show them light down there. I will never forget what happened next. All the boys bolted back up like cork floats and desperately rushed to the shore leaving most of the equipment at the bottom of the lake. The our friends’ faces were altered by fear. Even while sitting on the lakeside, warmed up by the hot sun, they trembled so hard it was almost impossible to understand what they were saying had happened down there.

They had found some off-white, massive object at the bottom of the lake. At first, they had thought it was one of those tanks or armoured vehicles from the legends, later, that it was a cannon. When they touched it, it turned out to be something crooked, rather light-weight and slimy. Attempting to lift it up to the surface, they tried to remove dirt from it first and discovered that the thing had a head, resembling a horse’s head. It had a crooked mouth, flat, yellow teeth, and huge, pale eyes like porcelain cups. The boy claimed it was the scariest-looking thing they had ever seen or could have conjured up in their worst nightmares. It had been an image best left deep down at the darkest corner of one’s memory.

Why is lifting something out from under water so traumatic to us? Is it not the same with the dark things we have hidden at the depths of our consciousness? Is not the very likelihood of lifting something truly frightening surface what is stopping us from bringing it to light? If there were no terrifying things within ourselves, would we be so scared of some drowned horse’s head? There is always a possibility we are not ready to face what is down there. What will life be like after facing it? What to do? How to be?

Back then we came to a consensus that it must have been the horse from the story about the man and the cart whose head had rotted away and mummified throughout the years, or a corpse of one of those werewolves that basked in the moonlight. Strangely enough, both of the options seemed equally terrifying to us.

Not one of us ever set foot in that lake ever again, not even to show off in front of the girls.

You can read about the stories of werewolves in Kurzeme in the book "Werewolf Tales of Kurzeme" by the theologian Ralph Kokin, but the stories recorded here - in the Raudas Forest, can be read here. 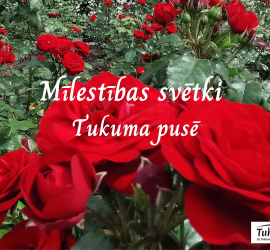 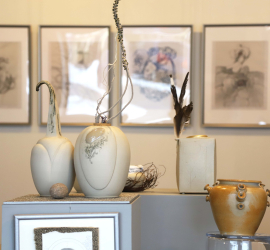