Z. A. Meierovics Square in Tukums

On 15 November 2018, a monument was opened in a solemn ceremony in Tukums in honour of the first Minister for Foreign Affairs of Latvia — Zigfrīds Anna Meierovics. The monument is situated in the Z. A. Meierovics Square at the intersection of Jaunā and Lielā streets.

Alongside the local residents of Tukums, the festive ceremony was attended by Ingrīda Meierovica, the widow of the youngest son of Z. A. Meierovics, the Honorary Citizen of the Tukums municipality and the former Minister for Foreign Affairs of Latvia Georgs Andrejevs, the Honorary Citizen of the Tukums municipality, the poet Māra Zālīte, the Minister for Foreign Affairs of the Republic of Latvia Edgars Rinkēvičs, the Chairperson of the Tukums Municipal Council Ēriks Lukmans, along with ambassadors and members of the diplomatic corps of several countries.

The authors of the monument are sculptors Zane and Matīss Kalniņi, and the architect of the square is Liene Līce. 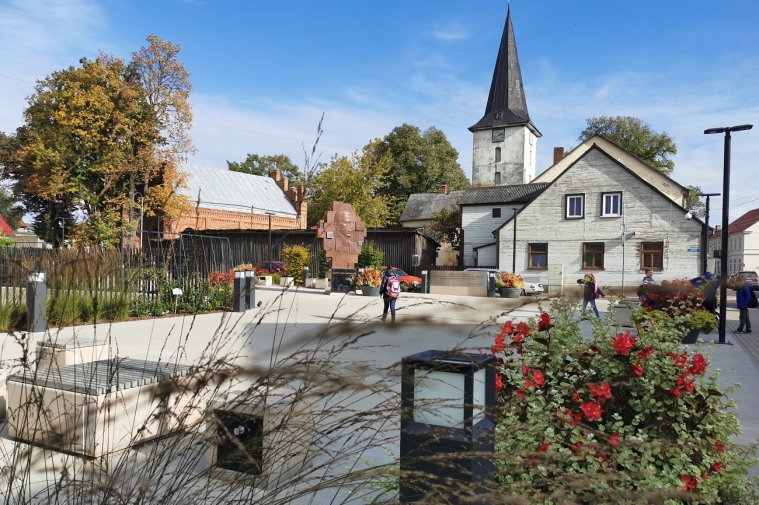 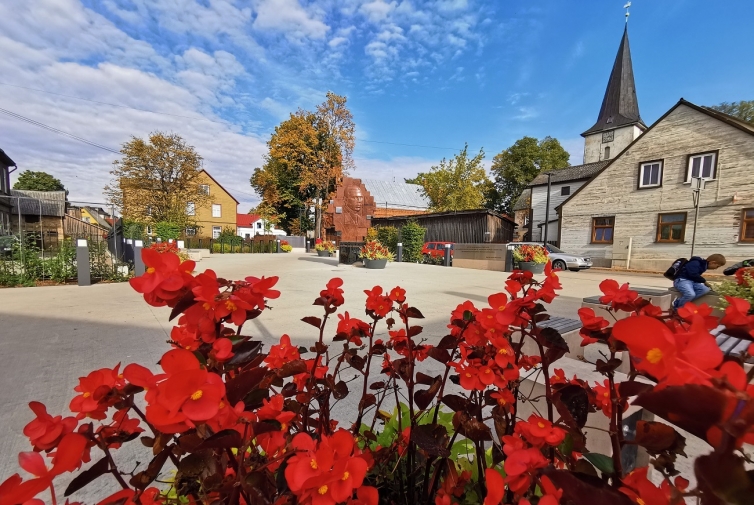 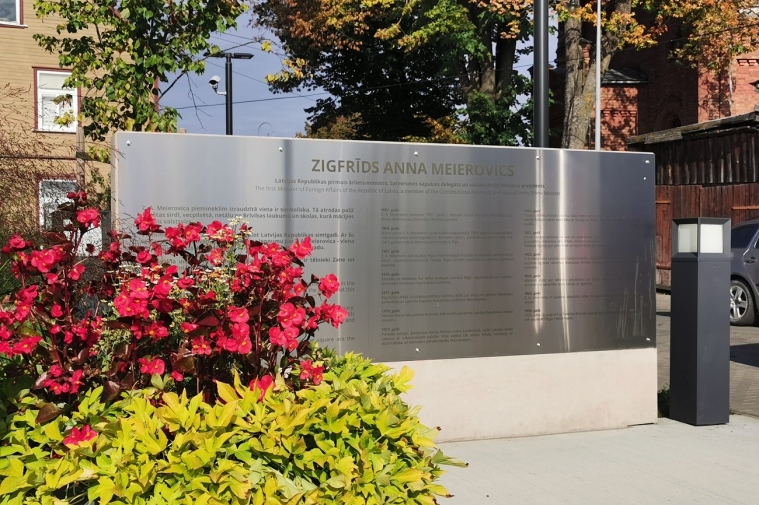 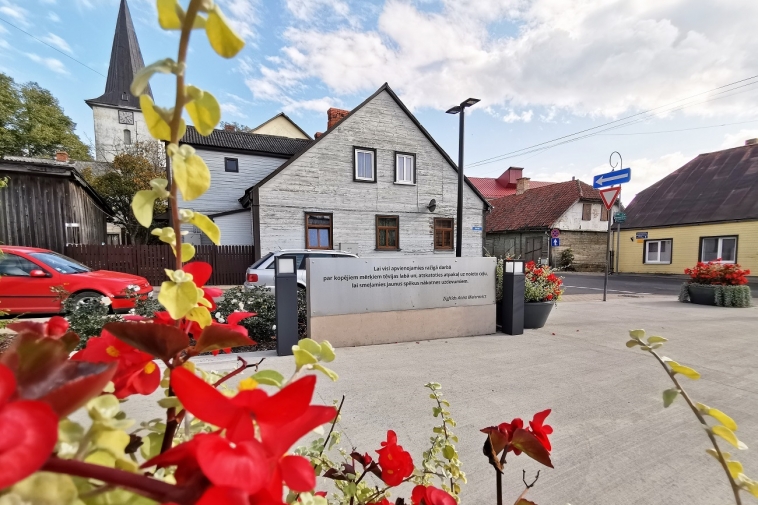 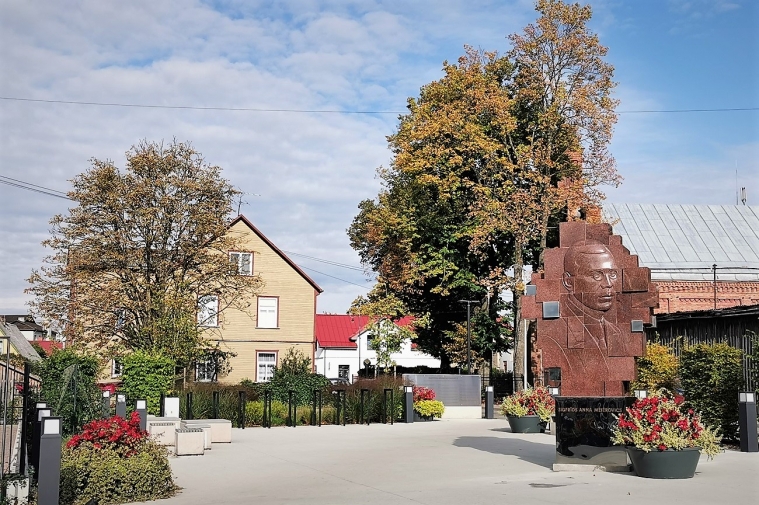 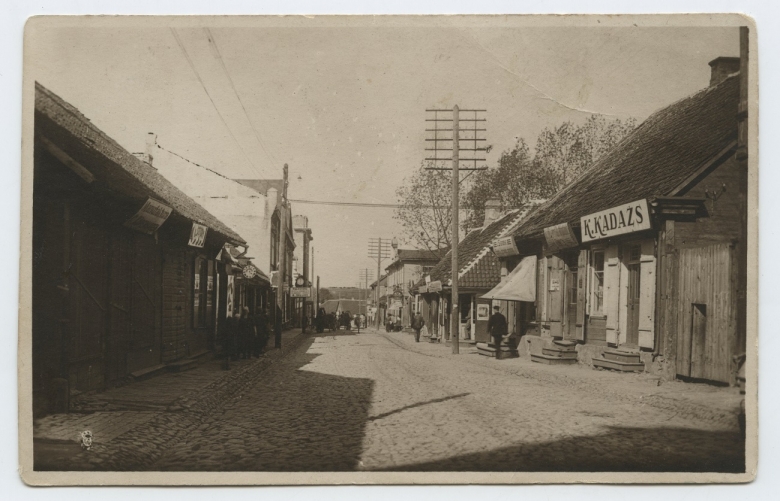 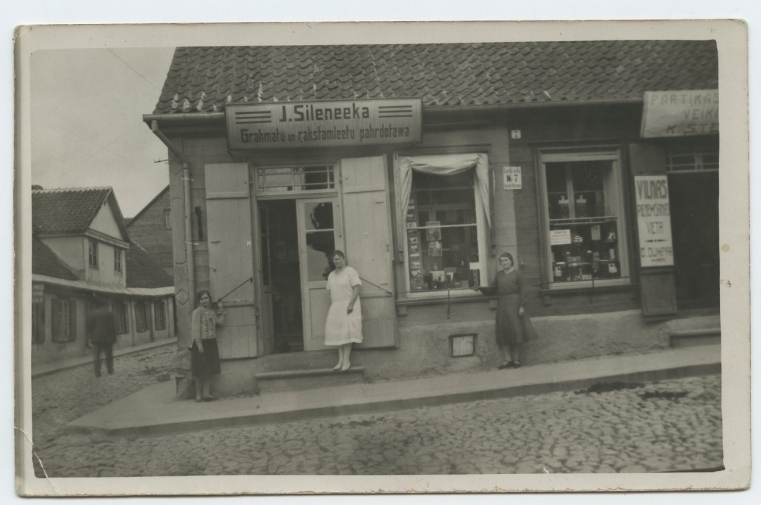 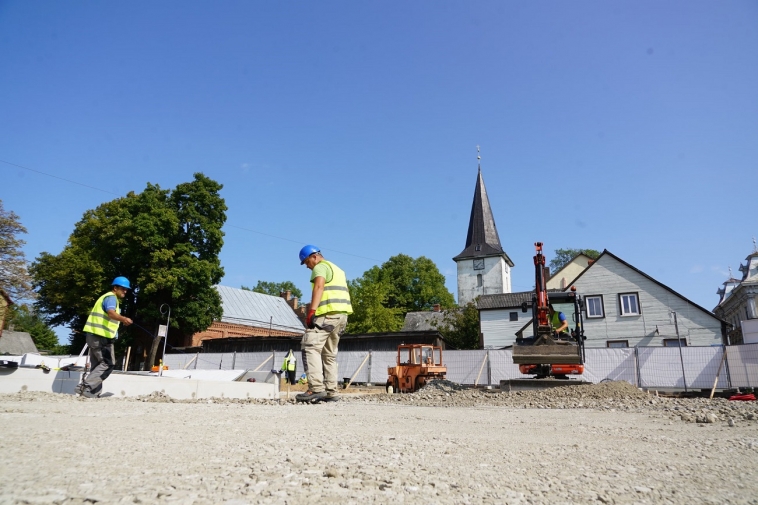 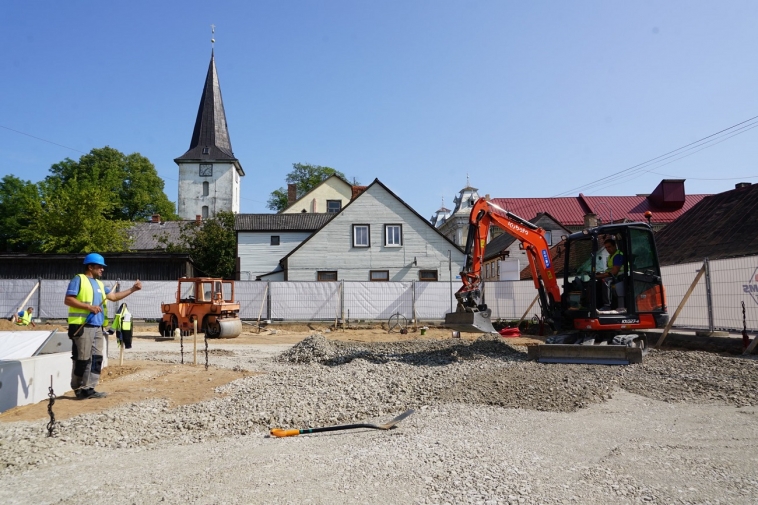 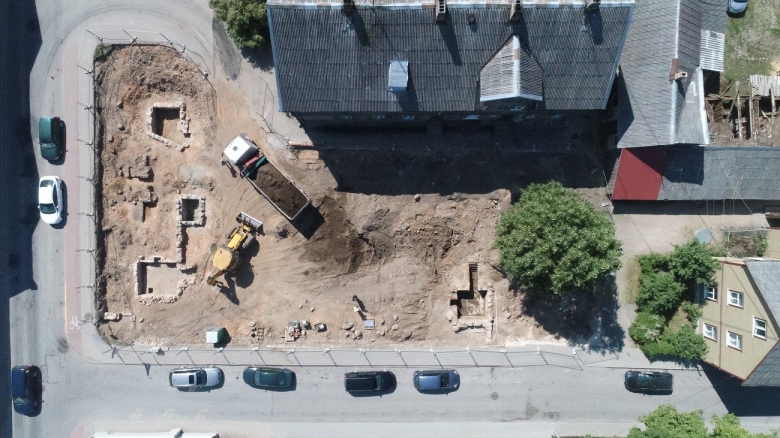 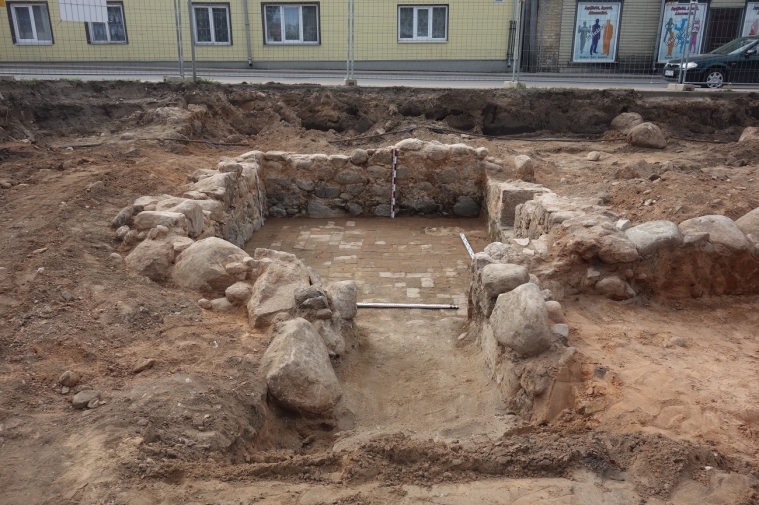 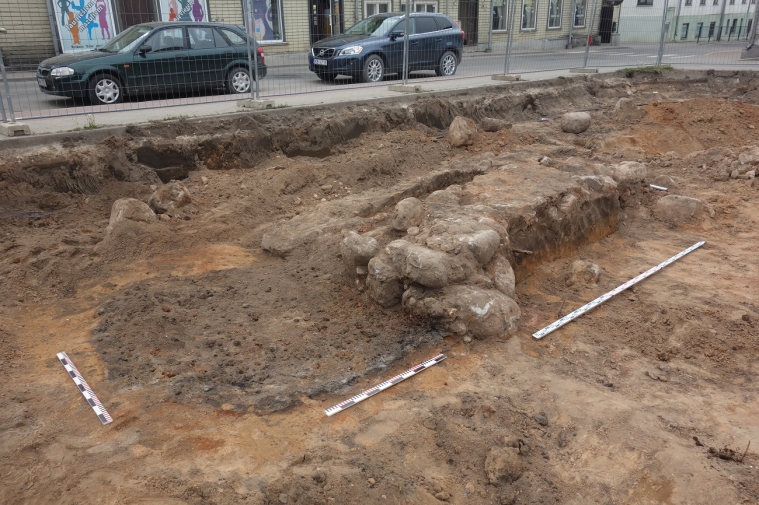 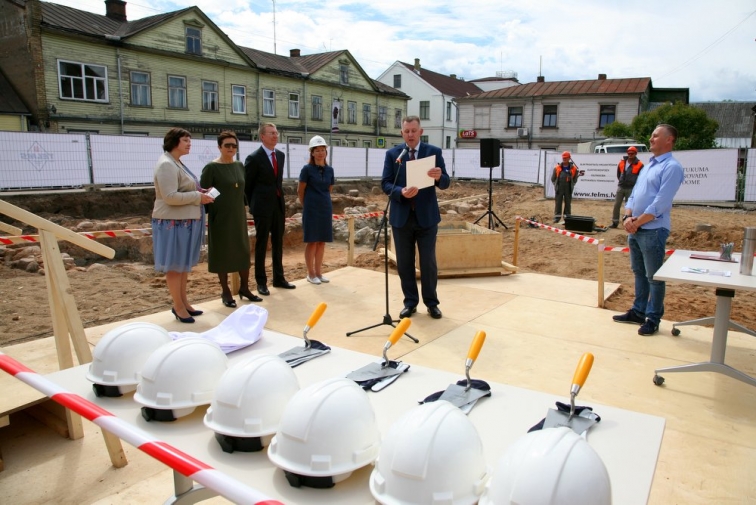 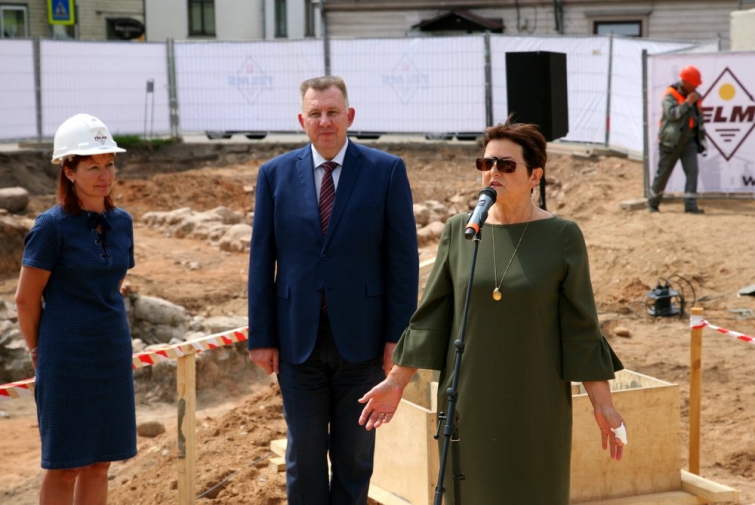 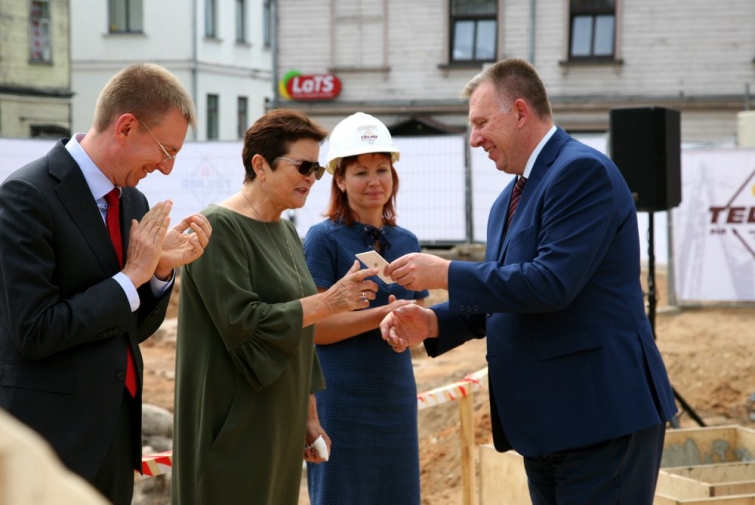 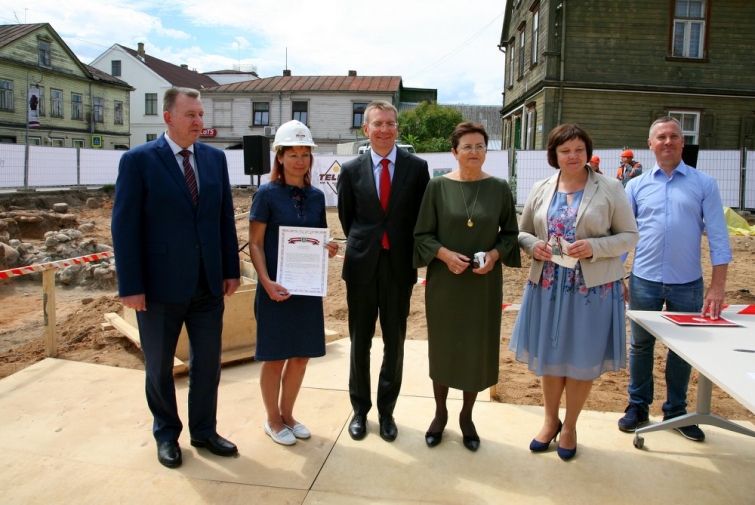 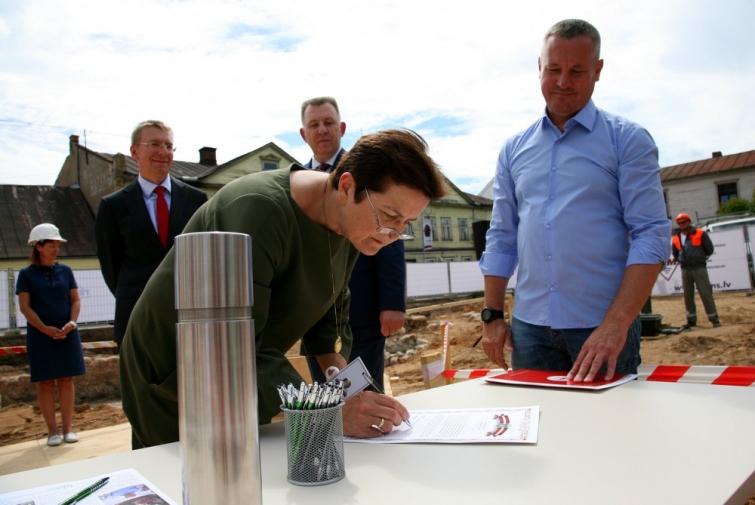 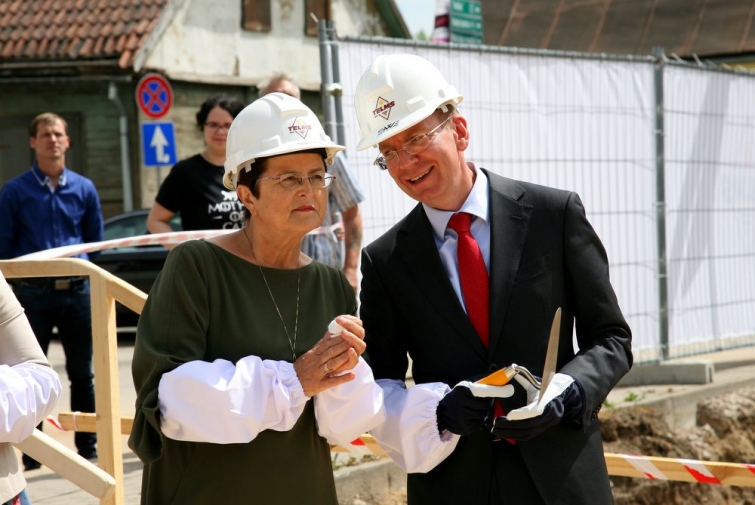 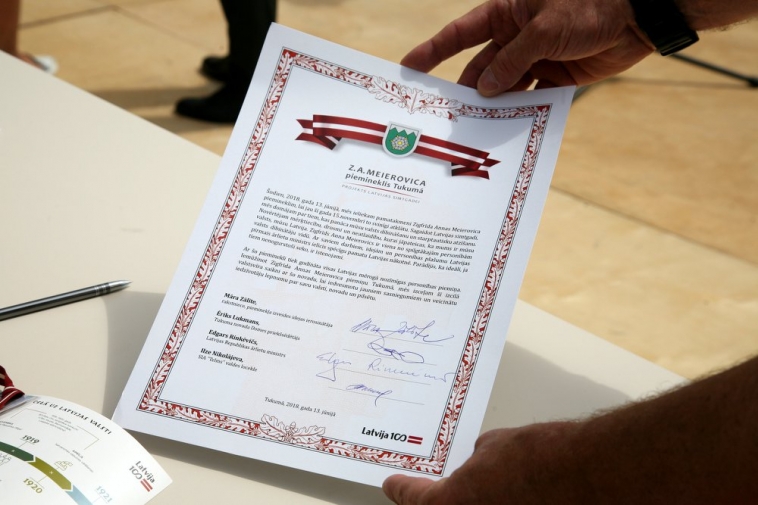 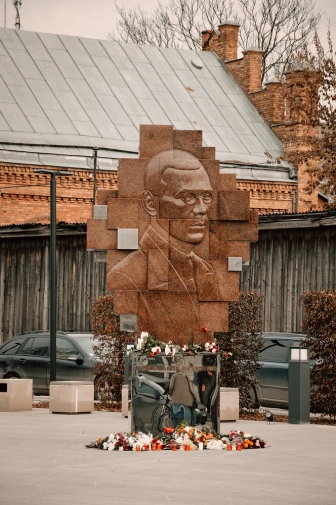 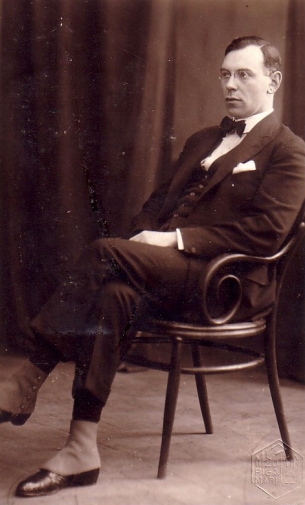 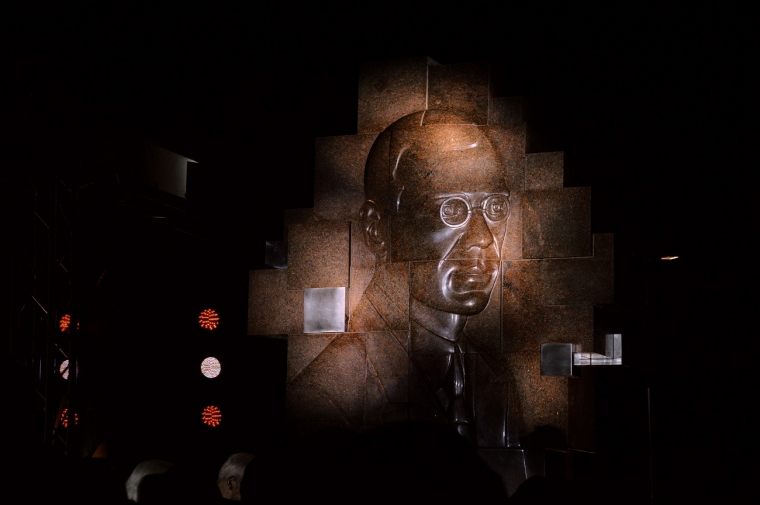 The Story of the Place

There are no data about the original owners of the lot. In 1860, this was the site of the home of the wood turner Markuss Hubers, along with two smaller buildings and a shed, as well as several outbuildings. The property of Hubers was among the largest on Lielā Street; it was appraised at 7349 silver roubles.

In 1881, the property was owned by Gustavs Jakobsons, who reconstructed the street-facing building and adapted it for commercial use. His property hosted several sales stands, a bakery and a hairdressers. In 1886, he built also four outbuildings along the boundary of the lot. 18 fruit trees grew in the approximately 0.2 ha large garden. In the late 19th century, the lands of Jakobsons were alienated to create Jaunā Street and to ensure access to the St. Stephan’s Roman Catholic Church (1896).

Archaeological excavations were carried out in May and June of 2018 by the researcher of the University of Latvia Institute of Latvian History, Dr. hist. Rūdolfs Brūzis, who uncovered at least 400 years old cellar of a residential house, the living quarters and foundation stones of a bread oven, as well as the foundations of a stable and historic cobble pavement in the courtyard.

Archaeologists uncovered basements of five buildings. The oldest of these was built in early 17th century, as evidenced by the Swedish Royal Mint shilling laid into the foundation. The level of prosperity of the residents of Tukums is evidenced by the bone handle of a 17th century fork from a festive table serving of the early modern times, and the standard of luxury — oyster shells.

The smaller in size, but deeper cellar sits under a building constructed in the 18th century. At the ground floor level of the building facing the Lielā Street, a bread oven is built on a large granite boulder base, which was used in late 19th century by M. Jankovskis’ bakery.

During the study of the cellars, Mg. geol. Aija Ceriņa carried out seed analysis and found that the residents of this land were rather wealthy. They were consuming raisins, poppies and figs alike. Jams made of local wild berries and raspberries were kept in the cellar.

As suggested by the hollow and ornate tiling found by archaeologists, the buildings were heated with tiled fireplaces. Holders for kindlings and candles, were used to illuminate the premises, as well as a petroleum luminaire made of a WWII munition shell. Many remnants of cups, saucers, plates, wine and beer goblets, vases, bowls, tureens and tripods, glass and porcelain drugs vessels and vials have been found. The findings included a white clay and porcelain pipe fragments, tobacco cutting knife manufactured in the 18th and 19th century Holland, as well as a 19th century toothbrush with a bone handle and wild boar bristles.

The range of goods sold at the colonial shop of Jēkabs Kurmis can be guessed from the sparkling fruit drink bottle with the label “Bilz”, the production of which was started in Germany in 1904 and a year later was sold also in Tukums. A bottle of the medicinal balsam “Hienfong” popular in the first part of the 20th century has also been found. The range of watches sold at the watch shop is evidenced with the oil bottles of watches manufactured at the turn of the 19th and 20th centuries in the German factory “MӦBIUS&SOHN HANNOVER” as well as a decorative watch element — a figurine of an angel.

One of the founders of the state of Latvia, a diplomat, the first Minister for Foreign Affairs of the Republic of Latvia, a Prime Minister having held several offices — Zigfrīds Anna Meierovics lived a short, but unusually remarkable life. His persona was entwined in legends already during his lifetime, but it was not spoken about at all during the Soviet occupation years. Latvia still is the home to generations that know very little about this individual who was extraordinarily important for Latvia.

To restore the continuity of today’s Latvia would have been impossible without the massive, selfless work that Z. A. Meierovics did, by achieving the recognition of the statehood of Latvia under very complicated circumstances.

In Europe torn by contradictions, as empires collapsed following WWI, Meierovics achieved something that few were daring to hope for — de facto recognition of Latvia on 11 November 1918. Based on this foreign policy achievement, the proclamation of the Republic of Latvia was possible on 18 November 1918. That is — right away, a week later. However, recognition of the independence de iure became possible only in January 1921. It was, to a great extent, specifically thanks to Zigfrīds Anna Meierovics’ efforts and personal characteristics. His European education, knowledge of languages, idealism and deep moral conviction that Latvia deserves and is legitimately entitled to exist, surprised at first, but later convinced the world.

Z. A. Meierovics’ personality, efforts and contributions for the benefit of Latvia confirm values, without which a nation or a state could not exist — self-assurance, reliance on national ideals and selfless work to make these values a reality.

On 5 February 1887 (the new calendar), a son Zigfrīds was born in Durbe near Liepāja in the family of Hermans and Anna Meierovics. Unfortunately, the family’s happiness did not last, because already on 16 February, at the age of 26, Anna Meierovica, the mother of Zigfrīds, died of postnatal complications.  According to Jewish traditions, Zigfrīds was given also the name of his late mother.

Zigfrīds spent his childhood in Pūre and Kabile. There, he was first educated and brought up. His personality formed there in the family of a Latvian primary school teacher. In 1900, he enrolled in the Tukums Town School (now, E. Birznieks-Upītis Tukums Primary School No. 1), where he studied until 1905.

In Tukums, Zigfrīds stayed at the boarding house of the teacher F. Jansons, but at the school, he was faced with the active Russification policy — the studies took place in Russian, and the newly enrolled students were baptised according to Russian orthodox traditions. But school mates remember him as an energetic, witty and always pleasant conversationalist, who never let anyone in on hardships of his living situation.

Despite the Russification policy, Meierovics together with other students nurtured their Latvian culture, by taking part in forming a choir, putting on plays, reading articles about topics that were not discussed at school and creating the handwritten school journal “Pirmie stari” (First rays).

In the later years, he spent the summers with the family at his cousin’s home in Brizule. After the divorce, his ex-wife and children continued spending summers at the “Druķi” home in Brizule, and Meierovics was a frequent guest in the area of Tukums. On his last trip to “Druķi” in Brizule, Meierovics died.

Zigfrīds Anna Meierovics: the Minister for Foreign Affairs and the Prime Minister

In 1920, Zigfrīds Anna Meierovics became a member of the Constitutional Assembly.  The leader of the Social Democrat Party F. Cielēns described Meierovics on the day of opening the Constitutional Assembly on 1 May as follows: “Elegantly dressed, the last button of the waistcoat left unbuttoned, a white flower at the blazer flap, stepping firmly, he arrived at the couloir hall. Standing tall, he shook hands with everyone, and his wide, kind smile showed satisfaction with what was achieved and optimistic convictions about future endeavours of Latvia.”

In 1921 (19 June 1921–26 January 1923 and 26 June 1923–26 January 1924), Zigfrīds Anna Meierovics also held the office of the Prime Minister of the Republic of Latvia. The awarding of this position can largely be linked to the achievements of Meierovics and the delegation of Latvia in 1921: On 26 January, the recognition of Latvia de iure was attained, but on 22 September, Latvia was accepted in the League of Nations. Two formidable goals that had been set at the time of forming the Ministry of Foreign Affairs had been reached.

The importance of personality and professionalism of Zigfrīds Anna Meierovics was proven by the apparent slump in the foreign policy of the Republic of Latvia that followed after his death in 1925.

The work style and personality of the first Minister for Foreign Affairs of Latvia is vividly depicted by the memoirs of his peer K. Zariņš: “In the silver cigarette case gifted to Z. Meierovics it said “We will find common ground in work”, and even some of his foreign diplomat friends had learned this aphorism, because Meierovics believed in getting along with everyone.” 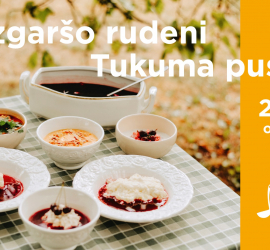 Enjoy the Taste of Autumn in t ...